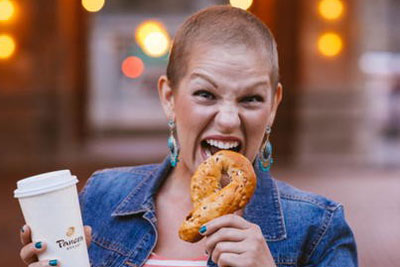 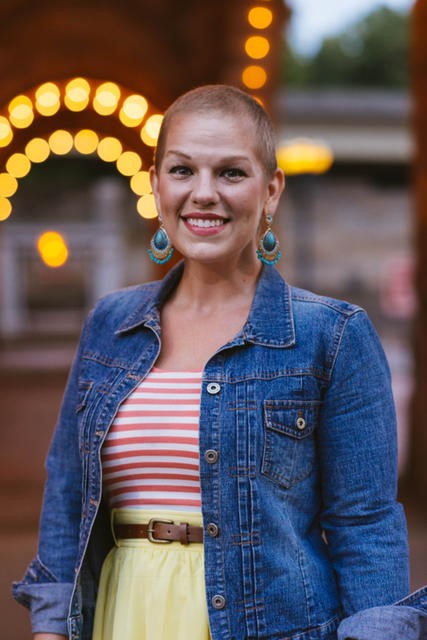 “I’d heard about all of the amazing benefits of sensory deprivation tanks from a friend, so for my 38th birthday I treated myself to a “float.” I went in on Friday morning and it was, in fact, amazing! I felt like a million bucks for the rest of the day. Since I had a jam-packed birthday weekend planned, I decided a hot shower and early bedtime would be wise.

While in the shower I felt what seemed like an extremely large grape on the upper, outside section of my right breast, near my armpit. I was certain this lump had not been there the day before. Like any normal person, I freaked! Being that it was Friday evening, I had the whole weekend to fret. Fortunately, I was able to convince myself that it must just be a cyst–it was somewhat squishy and moveable, after all, and had appeared out of nowhere–so I was able to mostly enjoy my birthday.

Monday came and an appointment was made for Tuesday. Tuesday came and my gynecologist concurred, “It’s probably just a cyst, but let’s get a mammogram done just to be sure.” Thursday came and they ran me through a mammogram and an ultrasound. The main doc then came in and said I had some benign nodules in my breasts, but this looked a little different. He wanted to do a biopsy “just to be sure.”

By this point I was thoroughly convinced that this was simply a cyst, so when the phone rang the following Tuesday, I answered it cheerily. “We received the pathology report, and I’m afraid you have breast cancer.” He quickly went on to explain a bit about the type and size, and said I’d be getting a call later from the nurse with details of the appointment they’d set up for me with a surgeon.

“From that moment on I was riding a fast-moving train of calls, texts, emails, appointments, blood draws, shared links to articles about women who cured their cancer with organic super grains/juice cleanses/crystals/spoken affirmations/spinning in circles while patting their head, furtive glances as my hair fell out, strangers stopping me in the store to share stories of those they’d lost to cancer, countless people looking at and touching my breasts and body, and all those sleepless nights trying to figure out what I did wrong that caused this.

“Bad luck,” the surgeon said. Having triple negative breast cancer meant that I couldn’t blame a hormone imbalance. I also couldn’t point to faulty genes thanks to the genetics tests and clean family history.

As someone who believes in cause and effect, this has perhaps been the biggest struggle. Did I eat too much chocolate? Not enough green tea? Maybe it’s from drinking out of plastic cups and using non-stick pans. Maybe it happened that Wednesday afternoon 6 years ago when I inhaled all the chemicals while stripping my floors. Or could it have been from the flame-retardants they use on electronics like they said in that one documentary?

But I ate the organic chia seeds and coconut oil! I wear sunscreen! I volunteer and am a good person, damnit! How can I be the one to blame for this? How can I continue to live in this world if literally everything I encounter is a potential threat? How can I accept that I will never know what was currency was used for my train ticket? How can I accept that I will never have 100% certainty that another won’t be issued, and that the next one won’t be round trip?

At this point in my cancer journey, I don’t have the answers and it’s still a struggle. All I can do is remind myself daily that this isn’t my fault. I didn’t ask for it, and I sure don’t deserve it. I won’t spend my days searching for someone or something to blame. Instead, I will love myself. I will continue to strive to be a good person. I will care for my body as best I can and schedule more floats. I will be grateful for the people I’ve met and things I’ve learned as a result of my diagnosis. I will accept that bad luck can happen and that good luck can too.” -Rachel M.