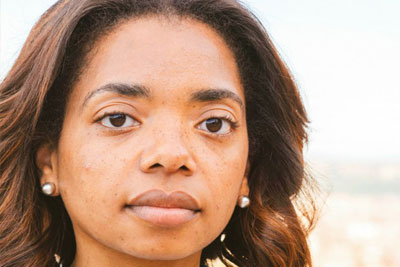 I first felt the lump just prior to our ten-year wedding anniversary in April 2015. Initially, I didn’t think much of it because I was in pretty good shape, and I didn’t have a family history of breast cancer. However, I had a gut feeling that I needed to investigate this issue more, so I made an appointment with my gynecologist. I was seen by the nurse practitioner who felt the lump, so she ordered me to have a mammogram. The biopsy was completed after a couple of days. I received the call on April 29, 2015 confirming that the lump I found was cancer.
The next month was a blur. My surgical oncologist ordered a breast MRI. I also participated in a research study, completed a 3-D mammogram and a nuclear breast scan.

The goal was to get an accurate size of the tumor in order to determine the best course of treatment. I also underwent genetic testing, which thankfully turned out to be negative. Unfortunately, the findings of the examinations were split; the breast MRI and nuclear study sized the lump over 3 cm, but the mammograms and ultrasound sized the lump under 2 cm. I decided to undergo a lumpectomy with radiation to follow. Although my lymph nodes were clear, the surgery was not successful because the margins of my tumor were not clear, therefore, I was scheduled to have a mastectomy.

The wait leading up to the mastectomy (over a month) was nerve racking. I worried that waiting too long, the cancer would spread, so I tried to keep busy with my family and focus on their sports instead of the cancer. However, my daughter broke her foot during one of her track meets, and my husband had knee surgery the day before I was diagnosed, so it seemed like our son was the only healthy person in our house (I wanted to put him in a bubble). The mastectomy and expander took place on July 28, 2015. After the mastectomy, although the tumor was a little over 2 cm (I was told this following the first surgery), malignant cells were present in most areas of my breast. So, the mastectomy was necessary.
Following my surgery, I received my “cancer free” call on August 11, 2015. Yet, the post-operative part was no fun. I hated the expander. I recall crying for the first time after coming home from the hospital and looking in the mirror. I felt so distorted and mutilated. My husband gently reminded me that this was only temporary and that I would get through this. I knew that already, but I’m happy that he was there to remind me that this was not the end for me.
I have a small frame up top, so the expander pushed up on me. Also, the expander is not meant to be permanent and does not look natural, so I developed quite the collection of scarves in my efforts to hide my chest during this process.

I was a runner prior to my surgery, but it was uncomfortable for me to run. I chose to walk (a lot) during this time to stay active.
Finally, I completed my exchange in November 4, 2015. I did not require chemo or radiation, and I am currently on Tamoxifen for treatment. I learned that the type of cancer I have is “fed” by estrogen, so I try to pay attention to what I eat more. I began initially by avoiding foods with added hormones to now transitioning to vegan.