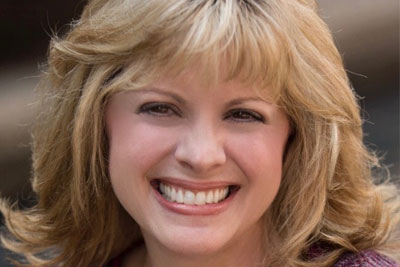 Tuesday, January 18, 2005. I was in the ultrasound room of Magee-Women’s hospital, and the doctor said “yes, we see something, and it looks suspicious.” You’d think that’s the day I’d say my cancer story began, but it wasn’t. My cancer story had actually begun decades before, when my loving, beautiful Mother was diagnosed with breast cancer at 29. She died two years later, while I was just a kindergartner. Then, a few years later, her younger sister, my precious Aunt Shirley who had been so sweet to me and my brother and sister when our Mother died, was also diagnosed. She passed away at 32. A few weeks later their father died of pancreatic c

ancer; his sister had also had breast cancer. BRCA genes hadn’t been discovered yet, but we knew something was up with our family tree.

Fast forward about thirty years to 2002…I received a scary call from my younger sister, who was 32 at the time. She had a lump. Three days later a biopsy confirmed that she had breast cancer. Thankfully, she had found it early, and doctors were able to remove it. Then, 15 months later she found another lump. That time she had chemotherapy, radiation, and more surgery, and then earlier this year — 16 years after her first surgery — she found another lump. That led to more surgery, more chemotherapy, and more radiation. Thanks to God and to treatments that get better every year, she is going to be fine – again. But it’s been another long chapter in our family’s genetics story. 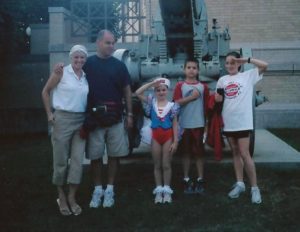 When my sister received her first (and then second) diagnosis, I felt so sad for her, and I felt guilty that she had inherited this family trait that I didn’t seem to have. Even though she had undergone testing that confirmed she had a BRCA1 gene mutation, I thought I had dodged the bullet. After all, everyone who got breast cancer in my family got it so young, and I had turned 38! Well, I didn’t dodge the bullet—that ‘normal’ for women in my family hit me half-way into my 38th year. My chapter in the story began when I found a lump while I was in the shower; which led to that ultrasound and the radiologist telling me “yes, we see something, and it looks suspicious.” 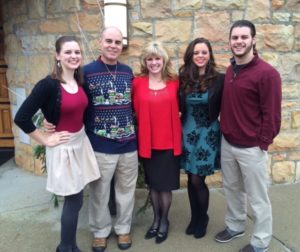 “Suspicious”. I knew that meant cancer, but I didn’t have time for cancer! My kids were only 10, 7, and 5! This “normal” for our family wasn’t fair! I was 38 and in great shape, but I had aggressive cancer. Doctors were suggesting a bilateral mastectomy because of my family history, I needed 6 months of chemotherapy, I was going to lose my hair, and, oh, I should be tested for that BRCA1 gene mutation that my sister had. Then, just to add another twist to the plot, if I had the mutation, I would need to have my ovaries removed, because statistics showed I’d also have a 55% chance of getting ovarian cancer. Needless to say, fighting cancer was becoming normal for my family.

A month later I got my BRCA1 result, and it was positive. I suddenly felt so much older than all the other kindergarten moms. They were energetic and having babies and planning birthday parties. I was sick, bald, and planning mastectomies and oophorectomies. My awesome husband took me to literally hundreds of doctors’ appointments, and he told me every day that I was beautiful. But I sure didn’t feel pretty. And, even though I’d seen my sister come through chemo and surgery more beautiful than she was before, I needed someone outside of my family to help me believe my life would return to my pre-cancer normal…someday…

Enter Jen and Susie…the pair that I would meet with in coffee shops and talk to on the phone, when I had a new chemo side effect or I needed someone to just “understand”. They’d both already “been there, and done that” for so many things I was going through. Their support during some marathon phone calls and some 9 a.m. coffees that stretched through lunch was immeasurable. They were young, smart, beautiful, and energetic; and they’d both had surgery, and they’d both been through chemo. They’d both had days where they were so wiped out that they couldn’t fathom unloading the dishwasher….and they were leading amazing, NORMAL lives! I’d share some time with them, and suddenly I could believe again that I’d get there someday too.

They were right. About 3 years post-treatment, I realized I WAS BACK. My energy level was 120% of what it was before cancer, and I have these bonus years to enjoy spending time with my three great kids — who are now wonderful young adults — traveling, hiking, and canoeing with my husband, sharing time with my extended family and friends, and helping other survivors cope with the struggles of their diagnosis.

Thankfully, my personal cancer battle seems to be over, but it’s still part of my family’s story. And now that my kids are young adults I have a new fear – the fear that I’ve passed the genetic mutation on to them. Our oldest daughter has had the test, and the day that she received her negative results was one of the happiest days of my life. Our two youngest kids have not yet been tested. Fortunately, I know there are new breakthroughs in research every year, so if they do have the mutation, they should have more and better options than I did to live a cancer-free life.

Thanks to advances in diagnosis, prevention, and treatment, I truly expect that the chapters for my kids will be different than mine. And, whatever those future chapters bring, I know that our story will have a happy ending thanks to the joy of knowing that every day is a gift and thanks to the support and friendship of people like those I met through the YWBCAF.