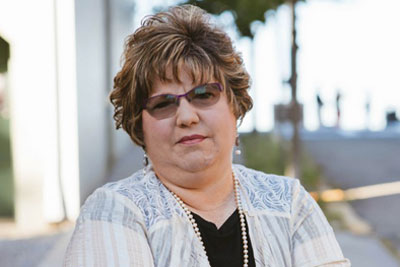 I was diagnosed with breast cancer in October 2008 at the age of 42. The month of pink ribbons and messages of “breast cancer awareness!” Who is not aware of breast cancer? I was reminded of my personal connection to this awful disease everywhere I went, even in the grocery store! I’ve never liked the pink ribbon, now it’s even worse! My boys had just started kindergarten and 5th grade. Of course I was shocked, I had no family history and was young, so how could this happen? I had a lumpectomy, four chemo treatments and several weeks of radiation. At one point, someone said to me, “Wow you have breast cancer. That’s devastating!” I answered, “No, my mom dying suddenly 5 years ago was devastating, I can fight this!” But inside I was thinking, I have no choice but to fight, whether I wanted to or not. Some people wondered how I could get out of bed every morning, again, I didn’t want to die and I had a family to take care of.

Treatment ended after six months, my straight hair grew back curly and I went on with my life. A few years later, after much prodding from my oncologist, I got tested for the BRCA mutation, as a formality of course! It was really because I was under the age of 45 when I was diagnosed. I was more than shocked to get a positive result. I have the BRCA II mutation and was told I had a 60% chance of a primary breast cancer coming back if I didn’t take action. Again, I was young and my kids were still young. I couldn’t take that chance! I explored my options and took a year to make a decision. I chose Tram-flap Reconstruction, where they do a bilateral mastectomy and use abdominal fat and tissue to build new “breasts.” It was risky but I had enough abdominal fat to be a donor. Besides, this procedure would reduce my risk of getting another primary breast cancer to less than 5% instead of 60% and the risk of failure was in the single digits, so why not? I had the reconstruction surgery in February 2015. I felt like I had to keep fighting for myself and my family.

Well, to make a long story shorter, my case fell into those single digits and my reconstruction failed. Several surgeries, infections and more surgeries later, I am still a breast cancer survivor! I’ve gotten through the struggles with the support of my family and friends, who make me laugh just about every day, as well as my faith. I thank God for the blessings in my life, even if it’s the fact that my IV went in the first time! I also ask Him for the strength I need to get through whatever comes my way.

During a group exercise my family was involved in about a year ago, we were asked to write a word that described each of the other three people in our family. My older son wrote the word “resilient” to describe me! I almost cried as we discussed this because I realized I was setting an example for my children of how to deal with life’s challenges without knowing it. I still don’t like pink ribbons and I am constantly reminded of this horrible disease and how it’s impacted my life, both good and bad. But the overall lesson is that I continued to fight and to be positive.

I want to be here for my family and friends. I’ve always been a “glass is half full” type of person but being a breast cancer survivor has presented many challenges to that philosophy. My husband recently remarked, “You’ve changed – you’ve always been afraid of that” when I wanted to go on the Disney Safari and be forced to walk over a wooden bridge! I responded, “Of course I’ve changed. I’ve realized that life is meant to be lived!” Borrow from the “Save Lucas” Facebook page, this is my journey and I’m blessed to be on it.”