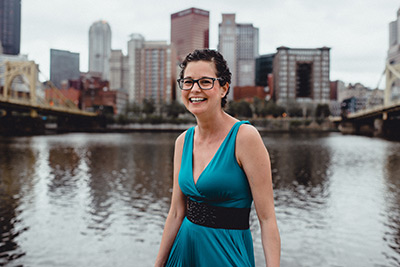 I was diagnosed with Stage 2B/3A Triple Negative Breast Cancer (TNBC), an aggressive, non-hormone based cancer. I was 36 weeks pregnant and under the age of 40. Since breast cancer runs in my family, I was pretty vigilant about doing self-exams, having clinical exams, and living a very healthy lifestyle. I came across my lump when I was applying lotion on my breasts.

I was in my 3rd trimester and I wanted to prevent stretch marks. I was also doing a self-exam since it was the beginning of the month. I felt the lump and knew it wasn't there before. I immediately left a message for my midwives. I am so glad I didn't chalk it up to being pregnancy related and that I didn't ignore it! I was diagnosed late-term and thankfully I didn't have to discuss doing chemo while pregnant. I had to induce at 37 weeks so I could start treatment as soon as possible. I was able to induce using natural techniques and managed to have a non-medicated birth, which was really important to me. 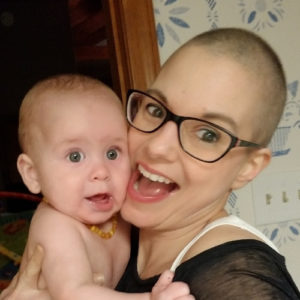 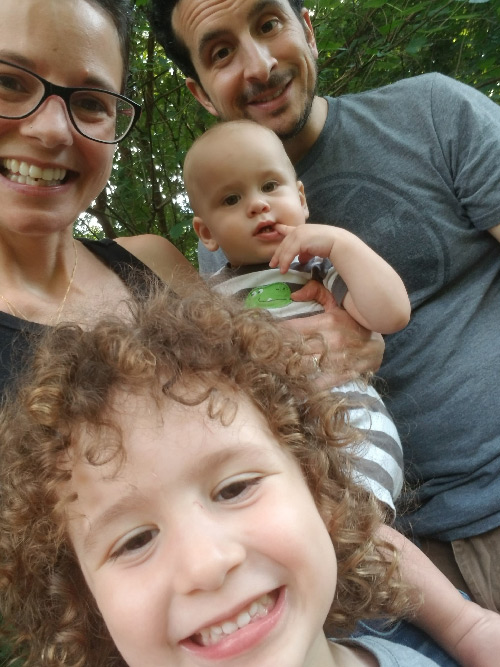 My baby boy was very healthy and scored 9 on the APGAR scale. What a relief! I had one week with him and then the following two weeks, I jumped right into the marathon doctor appointments, scans, tests and my port surgery. Everything moved so fast! It was such a whirlwind for my mind, body and soul! I started chemo three weeks after I had him and did 16 TC/AC chemos over 21 weeks. My husband Jeremy surprised me at my last chemo with all of our family and close friends waiting for me to ring the bell! It was surreal to walk out and see them all there, visiting from all over the country!

I was dressed as Wonder Woman and they all had on Team Cara shirts. It was such an amazing way to celebrate such a big milestone! Going through chemo with a newborn and a toddler was no easy feat, but we luckily formed the most amazing village that helped us get through it! We had help and support from family, friends, neighbors and even complete strangers! Our local mom's group rallied for us and made us so many meals, dropped off gifts, and checked in regularly. We felt so blessed!

I then underwent surgery for a lumpectomy and sentinel node dissection. My nodes came back free of cancer and only microscopic cells were found in the extracted breast tissue. The tumor grew very quickly and was nearly 6cm when I started chemo, so only having microscopic cells was a terrific response! I then had 5 weeks of radiation, while continuing with my immunotherapy infusions.

Unfortunately, a few weeks after finishing radiation, I started having issues with my left leg. I noticed that I was tripping and stumbling quite often. Since I was still on the immunotherapy drug, we decided to schedule a brain MRI to see if I was experiencing side effects from the drug. While I had the MRI scheduled, I ended up in the ER after two extreme headaches, a fall, and almost complete loss of feeling and use of my left leg. They found that the cancer metastasized to my right temporal lobe and that there was a 2.4cm tumor along the motor cortex.

After many doctor conversations, we decided to do a three-day stereotactic radiotherapy surgery (SRS) radiation to kill the cancer cells. The risk of removing the tumor surgically was too high, as there was a possibility of left side paralysis. I also started a new six-month chemo treatment plan. It is time to beat this once and for all! 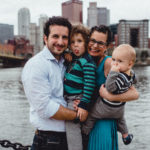 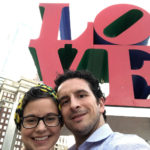