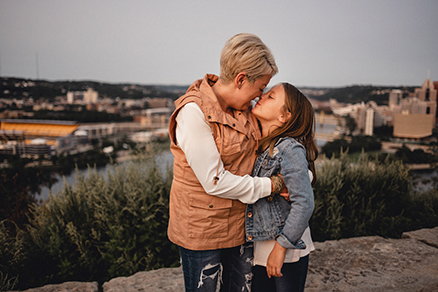 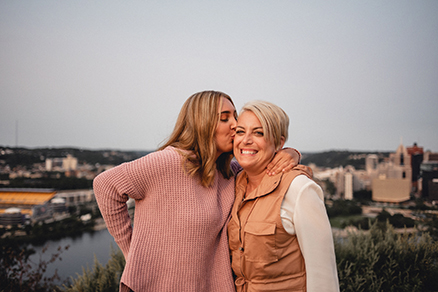 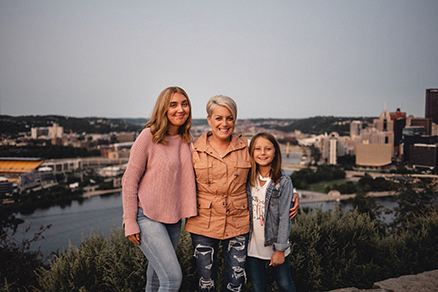 Hi, my name is Sara. I'm a 41 year old, single mother of two daughters. Here is my journey so far.

It started back in 2013, going into 2014. My left breast was having shooting pains coming and going for a couple of weeks. Then it swelled up and was tender to the touch. I called my doctor and they said, call your gynecologist. So I did that. The doctor looks at it and says, stop with the coffee abstract diet pills, cause I was currently taking them. So I Googled side effects. One of them said they could cause breast swelling. So I stopped taking the pills and nothing changed. I called the doctor back and told them that. They sent me for an ultrasound and a mammogram at the Women's Center. My mom and I were there all day. I went and talked to the doctor for the ultrasound and he said I needed a biopsy. He said, the doctor will contact you. With that information as I was staring right into his eyes, I said, it’s cancer. He said back, it doesn't look good.

My heart wanted to stop. Me and my mom waited for the doctor call to set me up for my biopsy. You have to play the waiting game on that. Soon as the doctor called, I said, I know it's cancer. He said, yes it's breast cancer. My mom's mom had passed away of ovarian cancer so there is a strong gene in my family. Six months prior to me getting diagnosed, my mom was diagnosed with ovarian cancer, the same cancer that took my grandmother away from me. Come to find out, I had stage 2b IDC ER positive breast cancer. They recommended getting a genetic test. Me and my mom both did. We do carry the BRCA1 gene.

My treatment started with chemotherapy, the standard cocktail for breast cancer. Then I had a double mastectomy with reconstruction. Then 36 radiation treatments, then a complete hysterectomy.

For about a year and a half, everything was going good. Then the devil crept up again. My mom‘s cancer came back in her liver and bile. She fought for a year and a half and lost her battle in 2016. By then, I was four years out. It was rough, but life must go on.

Fast forward to 2019. It's been six years and cancer hasn't came back yet, but I started having lower back pain here and there. It was very mild and I let it go, blamed it on my mattress. I went and got a new mattress but kept on getting consistent pain, to the point where I was waking up and I couldn’t even get out of bed. I had to roll out of bed, it was so bad. So I figured, go to the chiropractor. I see the chiropractor and he starts cracking me for about a month or two months. But it’s getting worse. Finally I called my oncologist because the chiropractor said, you might want to call your oncologist. I didn't even think about it. She ordered an MRI and some blood work. We found that my cancer was back, and had metastasized to my bone. Mind you, I was supposed to be on hormone therapy after my first diagnosis, but I chose not to take the estrogen blocker. I was blindsided. By that time, I was in so much pain because the tumors were down my spine pressing on stuff. Thank God I wasn't paralyzed, and thank God I can still control my bowel movements. 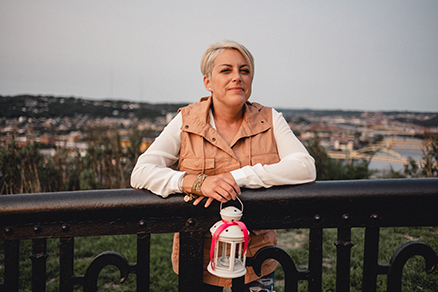 I had to have immediate radiation, 10 rounds. There were days I came home so nauseated and crawling up the steps because I couldn’t stand straight up because I was in so much pain. My back was slouched over from the cancer. Come to find out I had four broken vertebrae. I went to Allegheny General. My doctor put two rods, 29 screws, and 83 staples in my back to straighten up my spine. I am doing much better nowadays. I lost a lot of weight and three inches in height. My body went through the ringer. I was devastated and couldn’t get out of bed for days. Thank God it was cold and dreary. When spring came around, that’s when I had my surgery. I finally started coming out into the light. I finally said, let's get this show on the road, come up with a game plan! Get the best doctors that you can and get on a good regimen! 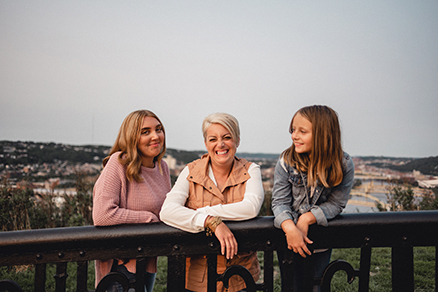 I plan on being here for a long time. I have two young daughters and I'm so grateful they were here by my side the whole way, helping their mother as she was sick hopeless laying in bed. Still, they were there for me, helping me, lifting up my spirits, pushing me, making me want to fight this battle, and thrive for a very long time. I'm so grateful for all the love and support I got from friends and family when I was really down. I'm so thankful for Jen and this website and the women in this group that I have met. They are very extraordinary wonderful people. This is my journey.