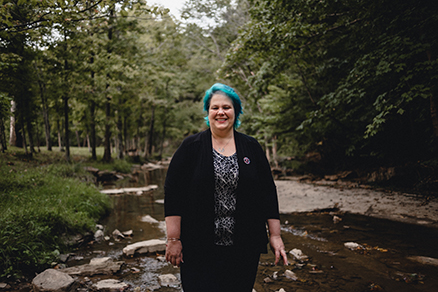 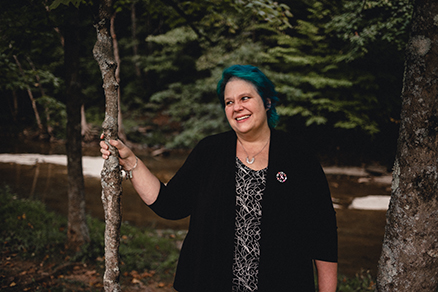 The year was 2018, I was running through life without a single care in the world. A newlywed, I finally stepped down from a very stressful job and was living my dreams, having the time of my life. Life was fun, fast, and full of adventures. I felt carefree with my new husband Mike.

Things changed very quickly in April. It was after my routine mammogram, ultrasound, and MRI on April 9, 2018 when things got concerning. As I was having my ultrasound done, the radiologist came in to do a second look. I saw the mass on the screen. My heart sank. As a medical assistant for 31 years, I was familiar with many aspects of testing. It was then the radiologist asked me to schedule a biopsy. I calmly asked the doctor, please, in your opinion, what percent chance is this abnormality on the screen breast cancer? He hesitated. I explained my medical experience and that I lost my mom, Claudia Knaus, to metastatic breast cancer on March 14th, 2015. I explained to the doctor, I just need to mentally prepare myself and my family. He quietly said, I have been humbled before by being incorrect, but my guess is 90% sure it is breast cancer. I thanked him, and cried the whole way home.

Things moved very quickly after that day. The phone call came on April 23, 2018 at 9:05 while I was at work. It was my local breast surgeon. It was the phone call that nobody wants to receive: the results were positive. As she assured me it was very early and not to worry, it was then that my personal battle with breast cancer began.

Through the following months I would learn first hand the many ups and downs of going through treatment. I chose to go to Cancer Treatment Centers of America in Philadelphia where I underwent a lumpectomy, sentinel node biopsy, and intraoperative radiation therapy. The cancer was considered early stage, ER/PR positive, and HER2 negative. It was stage 2a grade 2, with angiolymphatic invasion on the official pathology report. When the MammaPrint test results came back high risk for recurrence, it was then that chemotherapy was recommended.

Summer was here. June, July, August. At this point I had already had a sepsis infection after having fluid removed from a large seroma post-op, and blood clots in both of my lungs from a PIC line that was used for the antibiotics to treat the sepsis infection. I was weak, tired, and could not shower myself. I was still unable to work. The financial impact of cancer hit our home along with the emotional impact.

At the end of August, I found myself at UPMC South with my mom's oncologist. She was quite shocked to see me. I was still very weak and needing chemotherapy, which I was late starting due to multiple setbacks post-op. On December 5, 2018, I completed chemotherapy. Thrilled, bald, and happy to be alive, I rang the bell.

The road was bumpy. I am quite certain it was unpaved in many spots in 2018. I presented to the emergency room 10 times. I was admitted 9 of those times. The one time I was not admitted was a broken arm from a fall due to the neuropathy from chemo.

On February 13, 2020, at my routine mammogram, ultrasound and MRI, again the radiologist came into the room. My heart sank. This time it was three masses in the same breast. Valentines Day at 5:00 p.m. the phone call: my oncologist said, you need a biopsy as soon as possible. On February 21, 2020, the phone call came again. I was diagnosed with a local recurrence. At UPMC Magee, I underwent a partial mastectomy and 20 rounds of external beam radiation, which I completed on June 8, 2020. Currently, I continue treatment for various post-surgical complications and the damage to my lungs from the blood clots. I am on my way, beginning to regain my strength, independence, and wellness.

Breast cancer is a club you never want to belong to, but once you are in it, the world is an amazing place with so much support and love from people with whom you have one thing in common. I have been blessed with so many wonderful new friends over the past 2 1/2 years.

With heartfelt gratitude for my entire family and friends -- rekindled friendships and new friends (I call my ANGELS) – who all rallied around me and helped in so many ways, I know how very blessed I am and am thankful to be alive.